The first traces of human occupation in Valga are from Bronze Age (1800-600 BC). To this age belongs the petroglyph of Camporredondo, which is nowadays kept in San Miguel de Valga. The Celtic fortifications (known here as “castros”) of Roda do Castro (in Setecoros) and O Castro (in Cordeiro) belong to “castrexa” culture, from VI BC-II AD centuries.

The lands of Valga were, during the Old Regime, under the jurisdiction of Cordeiro and Padrón, which belonged to Santiago in that moment. At the beginning of the nineteenth century, during the Peninsular War between Napoleon’s empire and Spain, it started a bloody battle in “Casal do Eirigo”. In this battle, the inhabitants, led by Pablo Marillo and the priest Concha, defeated Ney and Maucunne troops, making them go back to Pontecesures.

The town arose after the first local division in 1821 from Cortes de Cádiz. The place was called Cordeiro till the second local division in 1836, when the place adopted its current name. In 1925, the town lost part of its territory due to San Xulián de Requeixo segregation that today belongs to Pontecesures. 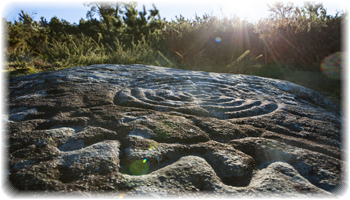