The Nativity Scene Of Valga

THE ARTICULATED NATIVITY SCENE OF VALGA

Valga’s handicraft Crib in motion is one of the most spectacular Nativity scenes in Galicia, not only for its size, but also because it incorporates modern elements, as it is not limited to collecting typical religious scenes.

It is one of the most important, social, cultural and most keenly anticipated events of the year, not only for the locals, but also for the thousands of people who decide to travel from different points of Galicia to Valga with the sole purpose of amusing themselves by closely examining these small and endearing hand-carved figures representing all kinds of Christmas decorations as well as different aspects of the activities and the current affairs in Valga and throughout Spain. This is all possible thanks to the efforts and dedication of a group of neighbours, supported by the Town Hall.

There are many Nativity scenes set up throughout Galicia and Spain during Christmas. However, this crib is not only limited to representing the nativity but it places it within the setting of a Galician village, especially of one of Valga’s little villages. The depicted scenes do not only include the typical desert and camels, which are also there, but we will also see how the traditional killing of the pig is being carried out or how a woman is milking a cow among many of the other scenes of rural Galicia in a landscape with different micro-climates within a space of enormous dimensions. It  is considered the largest craft articulated crib in Galicia and one of the largest in Spain, composed of approximately over 3.000 pieces, 300 of which are in motion, within the approximately 250 m2 the crib occupies.

Along with the classic religious scenes: the Magi, the birth of Galicia (the killing of the pig, the blacksmith, the wheat harvesting, the wine and liquor making, “la Santa Compaña” (a Galician legend about a night procession of spirits carrying lights, ...) and local scenes (different processions taking place throughout the year in the municipality, the Youth Festival, the old brick factory located next to the location of the crib as it was in its early days ...). Among the figures are some famous people from the municipality of Valga (La Bella Otero and Xesús Ferro Couselo) and from Galicia (Rosalia de Castro, Castelao, Camilo José Cela, ...).

There is also room for the current social and political life: the national team football players, election debates ... and among them, a hidden personality who the visitor must look for. As a reward, the winner will get one of the figures of the Nativity scene. Figures and decorations are made of paper, plaster, modelling clay, wire, wood, stone, cloth...; the work being a hundred percent handicraft.

The crib can be visited any day of the week from the first Sunday in December until the second Sunday in January. Throughout the year you can also visit the crib by contacting the Cultural Association of Friends of the Crib of Valga.

These original aspects undoubtedly constitute the uniqueness of this crib, which attracts a large number of people. In recent editions the estimated number of attendees was 40,000.

The Articulated Craft Crib of Valga was declared Galician Tourist Interest in 2013. 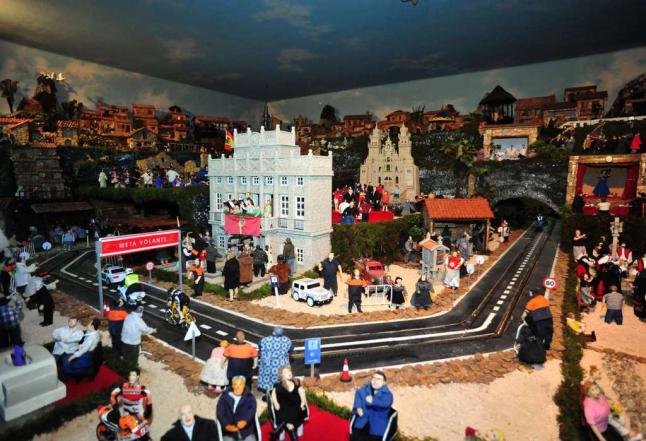