THE EEL FESTIVAL AND THE TRADE FAIR OF THE GALICIAN LIQUOR

On the last weekend in August, Valga hosts the Eel Festival and the Galician Liquor Trade Fair, one of the most popular celebrations in the district of Caldas.

This gastronomic event has been celebrating since 1989.

During the day dedicated to the eel, thousands of diners come to sample it in multiple forms: in pie, stewed with potatoes, fried, breaded and served with white rice, pickled or with “cachelos” (boiled jacket potatoes).

During the days before the festival, a culinary competition which rewards the best eel recipe is organized. A jury selects two finalists and the winning dish is selected through an open-door sampling in which all the attendants can take part.

Along with the eel, the other attraction of the festival is the liquor or “caña” in the Galician language, another typical local product. The fair focuses on Valga’s  three most typical varieties: white, herbs and golden liquor. All the `cañeros '(liquor distillers) in the Caldas region are invited to take part in the Contest of  the Galician Liquor Trade Fair, in which, the best liquors of the year are chosen and during which the local 'distillers ' organize a two-session sampling in order to reward the most outstanding liquors.

On Saturday, the big day of the Liquor Trade Fair begins with an exhibition of  the distillation by the “Cañeiros” of Valga, the “requicheiros” of ​​Portomarín and the “augardenteiros” of Vedra (all three words meaning distillers in Galician). It continues with the opening of the stalls, in which various municipal associations exhibit their works and offer products linked, in some cases, with the "caña do país" (Galician Liquor). One o'clock is the time for the proclamation, read by a representative of the arts world and the winners of the Contest of the Galician Liquor Trade Fair are presented with their prizes. Then, those present can taste some Galician liquor-based cocktails while the Valga Municipal Brass Band enlivens the atmosphere.

At midday, a picnic takes place. Many of those who attend bring their own lunch while others prefer to sample the available menus: Galician pie, octopus, mussels, meat “ o caldeiro” style, sausages, ...

In the afternoon, there is a sampling of white, herbal and golden liquors in which festival official glasses, are used. These glasses are a gift from the team of organizers of the event to all the participants. The samplings continue with a great “queimada” (drink based on burnt Galician Liquor) during the open-air dance in the evening.

The Eel Festival and the Trade Fair of the Galician Liquor was declared of Galician Tourist  Interest in 2013. 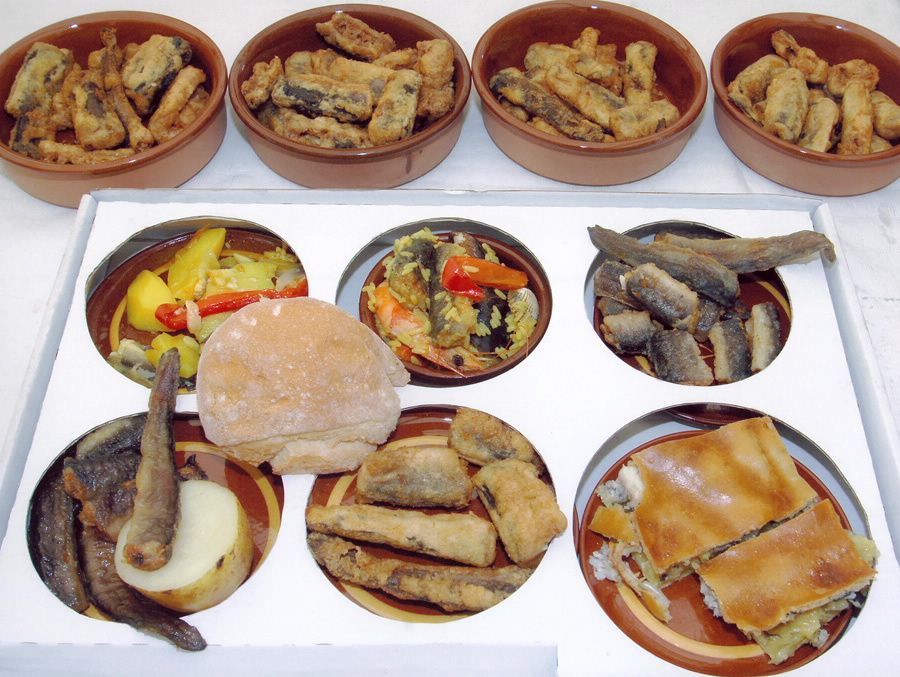